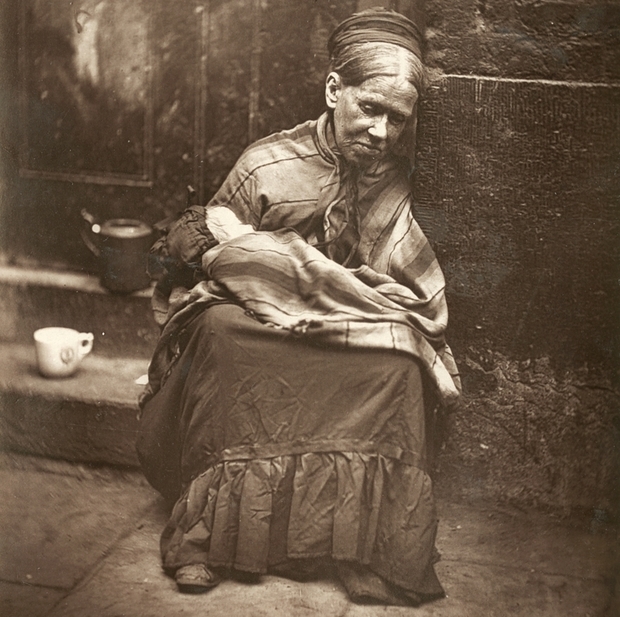 By the river
In the black wet night as the furtive rain slinks down,
Dropping and starting from sleep
Alone on a seat
A woman crouches.

I must go back to her.

I want to give her
Some money. Her hand slips out of the breast of her gown
Asleep. My fingers creep
Carefully over the sweet
Thumb-mound, into the palm’s deep pouches.

God, how she starts!
And looks at me, and looks in the palm of her hand!
And again at me!
I turn and run
Down the Embankment, run for my life.

Because of my heart’s
Beating like sobs, I come to myself, and stand
In the street spilled over splendidly
With wet, flat lights. What I’ve done
I know not, my soul is in strife.

The touch was on the quick. I want to forget.

The night rain, dripping unseen,
Comes endlessly kissing my face and my hands.

The river, slipping between
Lamps, is rayed with golden bands
Half way down its heaving sides;
Revealed where it hides.

Under the bridge
Great electric cars
Sing through, and each with a floor-light racing along at its side.
Far off, oh, midge after midge
Drifts over the gulf that bars
The night with silence, crossing the lamp-touched tide.

At Charing Cross, here, beneath the bridge
Sleep in a row the outcasts,
Packed in a line with their heads against the wall.
Their feet, in a broken ridge
Stretch out on the way, and a lout casts
A look as he stands on the edge of this naked stall.

Beasts that sleep will cover
Their faces in their flank; so these
Have huddled rags or limbs on the naked sleep.
Save, as the tram-cars hover
Past with the noise of a breeze
And gleam as of sunshine crossing the low black heap,

Over the pallor of only two faces
Passes the gallivant beam of the trams;
Shows in only two sad places
The white bare bone of our shams.

A little, bearded man, pale, peaked in sleeping,
With a face like a chickweed flower.
And a heavy woman, sleeping still keeping
Callous and dour.

Over the pallor of only two places
Tossed on the low, black, ruffled heap
Passes the light of the tram as it races
Out of the deep.

Eloquent limbs
In disarray
Sleep-suave limbs of a youth with long, smooth thighs
Hutched up for warmth; the muddy rims
Of trousers fray
On the thin bare shins of a man who uneasily lies.

The balls of five red toes
As red and dirty, bare
Young birds forsaken and left in a nest of mud–
Newspaper sheets enclose
Some limbs like parcels, and tear
When the sleeper stirs or turns on the ebb of the flood–

One heaped mound
Of a woman’s knees
As she thrusts them upward under the ruffled skirt–
And a curious dearth of sound
In the presence of these
Wastrels that sleep on the flagstones without any hurt.

Over two shadowless, shameless faces
Stark on the heap
Travels the light as it tilts in its paces
Gone in one leap.

At the feet of the sleepers, watching,
Stand those that wait
For a place to lie down; and still as they stand, they sleep,
Wearily catching
The flood’s slow gait
Like men who are drowned, but float erect in the deep.

Oh, the singing mansions,
Golden-lighted tall
Trams that pass, blown ruddily down the night!
The bridge on its stanchions
Stoops like a pall
To this human blight.

On the outer pavement, slowly,
Theatre people pass,
Holding aloft their umbrellas that flash and are bright
Like flowers of infernal moly
Over nocturnal grass
Wetly bobbing and drifting away on our sight.

And still by the rotten
Row of shattered feet,
Outcasts keep guard.
Forgotten,
Forgetting, till fate shall delete
One from the ward.

The factories on the Surrey side
Are beautifully laid in black on a gold-grey sky.
The river’s invisible tide
Threads and thrills like ore that is wealth to the eye.

And great gold midges
Cross the chasm
At the bridges
Above intertwined plasm.